Like most colors of Labrador in the earliest history of the breed, I’m sad to say the majority of fox red Labradors were culled at birth. The Lab was a working dog used during hunting pursuits and the hunting fraternity heavily favored the Black Labrador over all other colors. And so red labs were relatively uncommon. But in a reversal of the trend today, in the early days of the breed the more common shades of yellow that existed were dark yellow to fox red. The lighter shades of yellow and cream that we think of as normal today, were actually quite rare. In fact, the first ever registered yellow was a dark golden color. Two breeders from the UK, John and Glenda Crook of Balrion and Mac Bedford of Wynfaul Labradors had always had an interest in dark yellows. It was this interest that led to the rebirth of the fox red. The Crook’s owned one of the most famous Labradors of all time, Ch Balrion King Frost. In his litters he seemed always to produce very dark yellows. It was one of his granddaughters that produced the great Ch Wynfaul Tabasco, the father of the modern fox red Labrador. Not only was he a stunning red dog but he had excellent conformation. He became the only modern fox red Show Champion in the UK. Just as a note, Tobasco, if you went far enough back, is decended from the last Dual Champion in Great Britain, Knaith Benjo. The next step, again bringing in Ch Balrion King Frost, was a breeding with Wynfaul Tabasco to Lady Bountiful of Balrion, herself a very dark yellow girl, daughter of Show Ch Balrion Kings Ransom who was a son of King Frost. The resulting litter was all fox red proving the Crook’s theory of fox red to fox red will produce all fox red. Within this litter there was a red boy puppy sold to Sally Kelley of Kelleygreen Labradors in the United States, Balrion Red Alert. A couple of breeders, Kelleygreen and Keepsake Labradors through Sally Kelley’s big red import, Red Alert, have done a lot in recent years to bring the color back. In most all fox red pedigrees of today, a little research will show this dog in the pedigree multiple times. The Fox red Labrador isn’t a separately recognized color by the major kennel clubs around the world. It’s just one of the somewhat wide variation in shades of Yellow Labrador available. We specialize in Silver Labs, Charcoal Labs, Champagne Labs, Chocolate Labs, Yellow Labs, and Black Labs 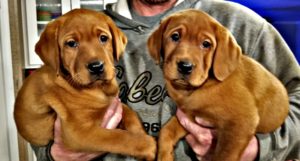